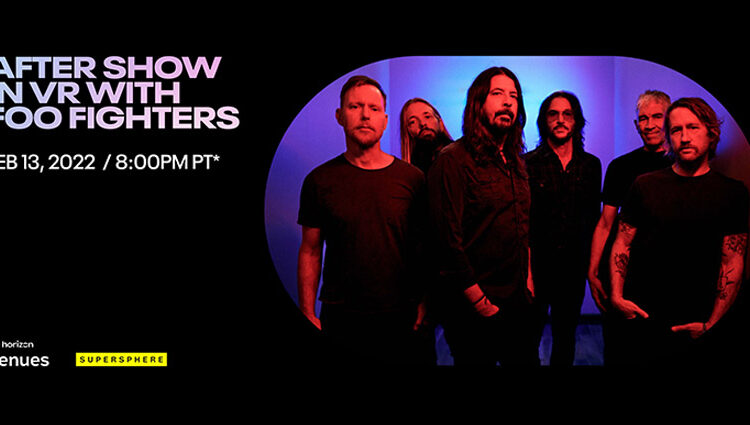 Rock legends Foo Fighters are set to take the virtual stage on Meta’s Horizon Venues as part of the Super Bowl show on February 13, the US tech giant announced this week.

The band will host an exclusive concert on Meta’s virtual reality (VR) platform, allowing viewers with Quest 2 headsets to watch the Rock and Roll Hall of Famers jam in stereoscopic 360-degree video at 20:00 PT, just after the game concludes.

We’ve never performed in VR…until now. Watch the #QuestAfterShow from the front row with @MetaQuestVR streaming right after the big game in Horizon Venues or on Facebook Live by RSVPing here: https://t.co/IWBstqmRpp pic.twitter.com/Yiw7Qoilcm

Those without headsets can also view the concert across Meta’s social media platforms such as Facebook, Messenger, and Instagram, and catch replays of the event in an Always On room hosted on Meta’s Venues and Oculus TV apps.

Attendees can download Horizon Venues and build their avatar with limited-edition NFL Super Bowl LVI tees and join the Horizon Venues lobby to socialise with other fans in a US football virtual room, as well as enter football games and virtual experiences via Arena Clash: Quarterback Edition.

David Grohl, Frontman and Founder of the band Foo Fighters, said in a statement,

“Foo Fighters love a challenge—from playing the biggest stages in the world to the tiniest clubs to making movies and miniseries… We’ve pretty much done it all. But we’ve never collaborated with Mark Romanek on a conceptual set of songs [for] a worldwide audience, where everyone has the best seats in the house thanks to the most badass VR tech… until now”

The news comes after Britain’s cinematic icon James Bond debuted on Venues in September last year, allowing global audiences to watch the premiere of the latest instalment ‘No Time To Die’ in record numbers, despite facing shuttered movie theatres due to COVID-19 lockdown restrictions.

The developments come as Metaverse and RT3D firms employ some of the world’s top music and sports talent to promote their platforms, leading to record use of Metaverse solutions in entertainment.

Stage Inc launched its Stageverse live events platform with a massive concert from British rockers Muse, which provided 360-degree immersive videos from a concert the trio performed in Spain.

Metavese firms also saw record use of their solutions to support artists struggling amid the ongoing COVID-19 pandemic, which has devastated the entertainment industry due to shuttered venues.

Artists such as Snoop Dogg, Dave Guetta, Ed Sheeran, and Grimes have also partnered with firms to back emerging technologies developed on the Metaverse, the spatial communications platform widely reported as the successor to the Internet set to reshape human interactions over the decade.

XRP Price Surges – Is Ripple Winning The Fight Against SEC?