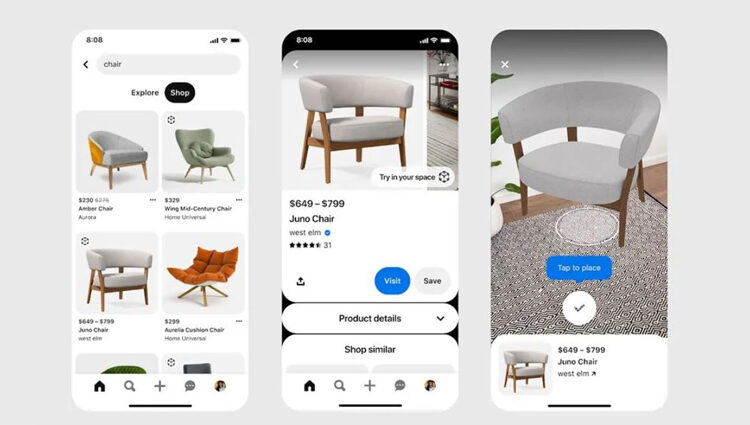 Pinterest introduced its “Try On for Home Decor” AR-powered feature that enables smartphone users to place interior design products such as sofas, lamps, or storage units in real-world environments.

The immersive shopping experience allows the photo-sharing platform to stand out from its competitors, says Jeremy Jankowski, Creator Management Lead for Home and Design for Pinterest.

Try-On for Home Decor by Pinterest uses smartphone cameras to place up to roughly 20,000 digital items in the real world. The firm’s smartphone application contains a ‘Lens’ option that activates its AR feature.

“We really do believe that shopping is more than about searching for a singular product. It’s about inspiring new ideas and speaking to new projects”

In-store and home-based AR try-on technologies present a modern solution for retailers, and studies show that, by using AR, many retailers can enhance customer engagement.

Cosmetics firm Estée Lauder partnered with Snapchat in April to create an AR try-on experience that allows users to place up to 60 shades of its foundation products on their faces.

The news comes after, various major brands marked a transition towards Metaverse-based eCommerce and retail opportunities.

Sportswear firm Nike purchased RTFKT to build a platform for high-quality, blockchain-secured 3D NFTs and digital goods to its global customers. It later partnered with Roblox to create an immersive Metaverse experience to promote the brand as well as physical fitness for children.

The Best VR Headsets for Enterprises in 2022