The Best VR Headsets for Enterprises in 2022 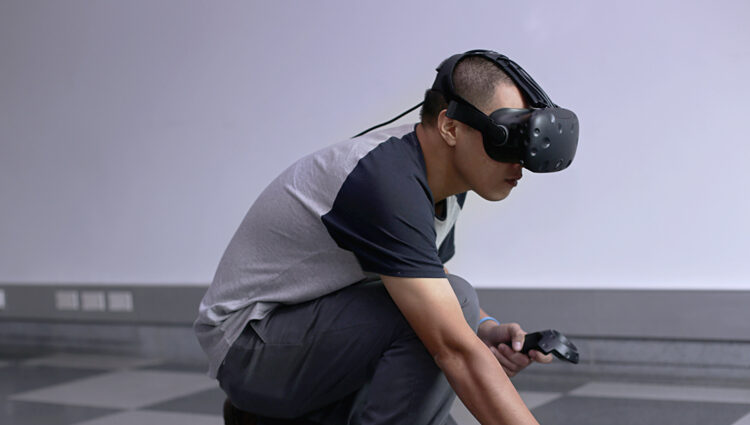 Enterprise VR is among the fastest-growing segments of the extended reality (XR) space. In a 2020 Grid Raster survey, it was revealed that 56 percent of organizations had implemented some form of augmented or virtual reality (AR/VR) in the last 12 months, and another 30 percent planned on doing so in the near future.

Industries like healthcare, manufacturing, and utilities are set to gain significantly from VR solutions, which would allow employees to learn skills and collaborate in an immersive space.

For example, a 2018 Capgemini report found that VR would become mainstream in 80 percent of manufacturing companies by 2023.

So, which VR headsets should enterprises consider for business use? Here are the top recommendations.

Oculus is a range of VR headsets, accessories, and software from Meta, the parent company of social media platform Facebook. The company acquired VR firm Oculus in 2014, and last year, announced its intentions to rebrand Oculus Quest and Meta Quest.

The Oculus for Business offering adopts Meta’s VR headset for enterprise use. Business customers will receive similar hardware technology as consumer users, complete with enterprise-facing plans and dedicated software for business use.

From 2022, Oculus for Business users can sign into Quest devices using their work accounts, providing them with access to tools such as account management, mobile device management, SSO integration, and Horizon Workrooms.

This is in addition to industry-leading sensors, audio, and controller systems. Quest for Business was priced at $800, but this may be revised in 2022.

VIVE Focus Plus is a commercial-grade VR system from Taiwanese tech giant HTC. It is an upgraded version of the HTC VIVE, one of the industry’s first commercially-available VR headsets.

It features a high-resolution display (2880 x 1600) compared to the VIVE’s original 2160 x 1200, Wi-Fi 5, and support for 65-bit operating systems. It also has an integrated graphics chip for high-fidelity visuals.

Like Oculus for Business, IT departments can manage the HTC VIVE Focus Plus through built-in mobile device management solutions. The pricing also includes enterprise warranties and services as well as a secure kiosk mode for companies who want to set up VR experience kiosks in stores and trade shows.

Pico Interactive is a Beijing-based VR company founded in 2015. It has a number of cutting-edge headset solutions for consumers, small to mid-sized enterprises, and large organizations.

The Pico Neo 3 Pro is an enterprise VR device that comes with a Qualcomm XR2 processor, up to 8GB of RAM, and an 3664 x 1920 screen with up to 90 Hz refresh rates, built-in eye tracking, and a spatial audio system.

The Pico G2 4K Enterprise has similar specs but offers 3 degrees of freedom (DoF) rather than 6DoF. On the other hand, you get a kiosk mode, hands-free controls, and replaceable polyurethane face inserts for better hygiene for multiple use environments.

Valve Corporation is a video game company based in Bellevue, Washington, which launched its Valve Index VR headset in 2019. The headset can run both Windows and Linux operating systems, and in February 2021, Valve registered patents for future VR technologies.

Enterprise users can consider the Valve Index VR system, which includes a headset, controllers, and base stations. Given that the device was initially intended for gaming use cases, users can expect immersive visuals and an intuitive user experience (UX), but will require tethering to a desktop to run Valve Index software.

Samsung launched its Gear VR device in 2015, starting with a $99 USD headset with a plastic shell. Since then, the company’s VR solutions have evolved significantly and today, Samsung Gear VR is one of the most popular headsets to use with a Samsung smartphone device. The device was developed in collaboration with Oculus VR and will bring a similar approach to features and user experiences.

Samsung Gear VR has a unique handheld controller that is more like a remote control than the usual form factor we have seen in Oculus devices.

The device is an affordable and fully functional product, but is only compatible with Samsung Galaxy devices running Android 11 or less. Devices running the latest version of Android from December 2021 will no longer support Gear VR.

HP’s enterprise VR headset has been available since 2019, and the company launched the second generation of Reverb in May 2021. The device is meant primarily for business use, which is why it is available for purchase in the Microsoft marketplace.

The upgraded version of HP Reverb G2 – the HP Reverb G2 Omnicept Edition – is also priced at $1,249, higher than most market competitors, while the older HP Reverb G2 is still available to buy at $599.

The device is natively compatible with the Windows Mixed Reality system and Steam VR’s content library. It weighs around 550 grams, which is comfortable for prolonged use. Despite this, it is not a standalone VR device and users will need to connect it with an appropriate desktop setup to run it.

While demand for enterprise VR solutions may be exploding, the number of available options remains limited. Headset design, development, and manufacturing is a time and cost-intensive process, which is why there are a handful of vendors recognized as established leaders.

Customers looking for more options may want to wait for Apple’s rumored VR headset that is scheduled for launch sometime in 2023 but promises an incredibly light form factor, 8K screen resolutions, and much more.