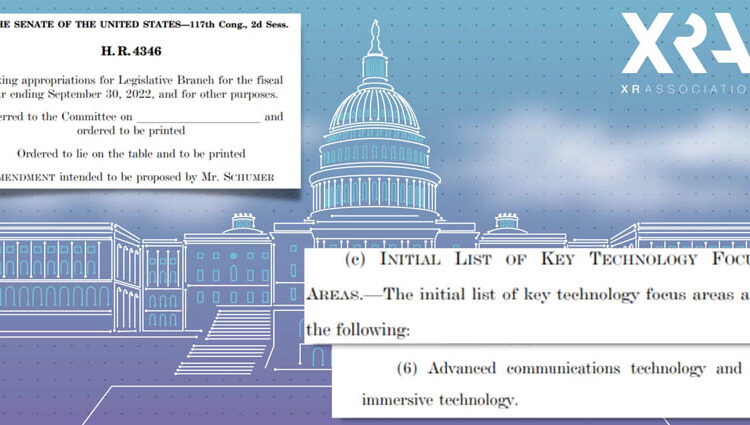 The US House of Representatives successfully voted on the Creating Helpful Incentives to Produce Semiconductors (CHIPS) for America Act [HR 4346] on Thursday, allowing “immersive technology” to enter a key focus of development for technology across the nation, the XR Association announced Thursday.

Senators passed the bipartisan Act earlier in the week, offering a part of $250 billion in research and development (R&D) to extended reality (XR), with US President Joe Biden expected to sign the document shortly.

The XR Association has lauded the measure following intense campaigning for lawmakers to include immersive and emerging technologies and others in the CHIPS Act, namely via an action centre urging citizens and organisations to liaise with representatives.

Speaking on the success of the Act, Joan O’Hara, Vice President of Public Policy, said in a statement,

“The XR Association worked closely with members of the Congressional Reality Caucus and other lawmakers to ensure XR technology was properly recognized as a significant technology of the future, and that it will be supported through important research and development opportunities.

She added that XR technologies were “a critical part” of the emerging tech ecosystem and could offer “immense potential in addressing societal, national, and geostrategic challenges.”

“Our member organizations build and rely on chips to create new wearables, connect devices, and allow for 5G transformation. As the chip shortage continues, this law will support developers’ ongoing projects and advance the industry.”

What is the Congressional Reality Caucus?

The Congressional Caucus on Virtual, Augmented, and Mixed Reality Technologies for the 115th Congress is a group of lawmakers rallying for the Government to fund, develop, and promote immersive and emerging technologies as a crucial step towards

Co-Chairs of the group said in a joint statement that they were proud to launch the Caucus, adding,

“As these technologies continue to advance and grow, this ‘Reality Caucus’ will work to foster information sharing between Congress and our nation’s world-leading technology industry. […] As these technologies develop, questions will inevitably rise in privacy, intellectual property and other areas. This is an opportunity to educate our colleagues and others to ensure Congress is doing all it can to encourage – rather than hinder – these enterprising fields”

The news comes as the XRA also rallies the global XR industry with several initiatives, including its Education Working Group (EWG) for promoting best practices for educators leveraging XR across health and inclusive working.

The organisation launched a further XR Advisory Council (XRAC) in March with a steering committee of top executives from across the global tech sector, including firms such as Accenture, Futures Intelligence Group, Meta Reality Labs, Google, Accenture, Microsoft, and many others.

The XRA has also backed the inclusion of multiple emerging technologies such as Web3, artificial intelligence (AI), blockchain, internet of things (IoT), XR, and others via the US Innovation and Competition Act (USICA) passed in recent months.