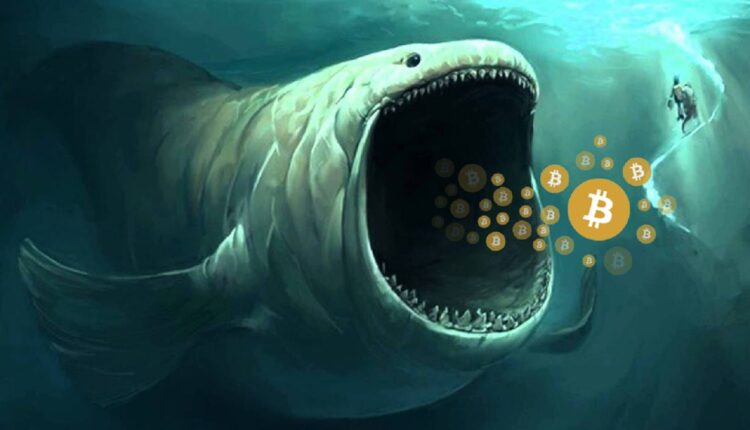 The bitcoin crash rocked the market to its core when the digital asset had lost over 50% of its all-time high value to bottom out at $33,000. It was as a result of market sell-offs across the financial space, sparking a ripple effect that was felt heavily in the crypto market. Market sentiment had crumbled during this time as investors had scrambled to sell their holdings.

However, not everyone saw the declining prices as a signal to sell before prices tank even more. Whales, who control a large portion of the circulating supply, took this as a cue to buy and have been filling their bags with all of the bitcoin being dumped on the market by panicking investors.

In a report from CC15Capital, the trading activities of a whale are outlined. In what came out to be a long document, it shows that the whale had been purchasing tens of thousands of bitcoin every few hours while traders dumped their coins. CC15Capital which is an asset allocator tracked the wallet and discovered that a single bitcoin wallet had been purchasing millions of dollars worth of bitcoin.

In the event of the past week’s price crash, this single whale had accumulated millions in bitcoin. Each purchase ranged from $2 to $18 million worth of BTC every few hours, averaging 48,000 BTC per purchase.

It looked like the whale was buying up all coins being dumped on the market. By the weekend, the wallet had successfully increased its holdings by a couple of hundred thousand BTC. The more the price dropped, the more bitcoin the whale bought.

CC15Capital, in response, called for bitcoin investors to stop dumping their coins, which are being bought by whales, thereby increasing the concentration of bitcoin supply in the hands of large investors.

Stop panic selling your #Bitcoin to this guy. He’s been buying $2-18 million worth every few hours. pic.twitter.com/eCE3UKXEfD

Tradable BTC On The Decline

CC15Capital also noted that the volume of bitcoin that is available for sale has gone down. Currently, 14.5 million of the total bitcoin supply is illiquid. This means that this supply has not moved, neither have they been traded. It is the highest concentration of supply which looks to be held for the long-term.

In the same tweet, the asset allocator explains that if the wallets holding this illiquid supply were to increase their holdings by a mere 27%, a total of 4 million BTC, there would be no coins left for sale, driving the supply to zero.

#Bitcoin illiquid supply (not traded) is at 14.5 million.

If those who #HODL the 14.5 million Bitcoin, would increase their holdings by 27%, or 4 million $BTC, there would be exactly 0 remaining coins available for sale.

Keep buying and HODL. Law of supply/demand will prevail. pic.twitter.com/RUb6gHSif6

Related Reading | Has Bitcoin Reached Its Bottom? Analyst Says It Still Has A Long Way To Go

Other whales have also taken advantage of the sell-offs happening in the market. As the exchange supply is dwindling, these large investors are making sure there is no shortage on their end when a supply squeeze happens.

This is how you buy $1 Billion in #Bitcoin in 2 months.

When you panic sell your $BTC, this is one of the guys buying it.

In two months, a whale wallet that had zero BTC in November has managed to gather an impressthatalance of over $1 billion in BTC. This account looks to have started buying with the crash and has continued to do so ever since. At the time of writing, the wallet balance sits at $1,013,777,643.51.

Why Bitcoin Could Be Worth $1 Million Per Coin By 2030