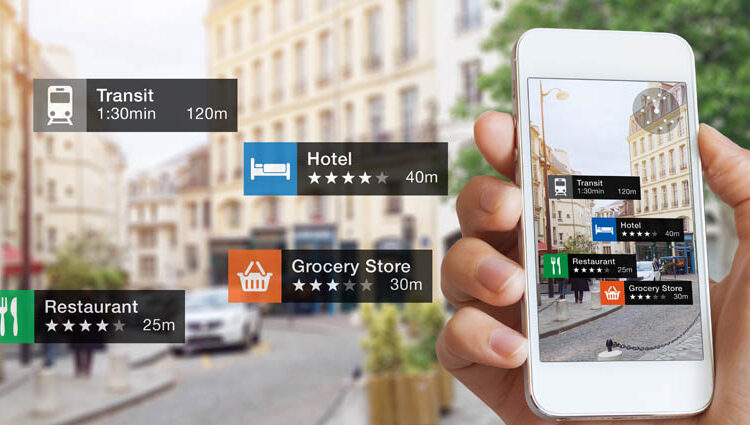 What is Augmented Reality? These days, AR is one of the better-known terms in the Extended Reality landscape, and one of the most accessible disruptive technologies around.

The global market for Augmented Reality is currently expected to reach a value of about $88.4 billion by 2026.

In simple terms, augmented reality gives us the power to enhance or “augment” our existing environment with digital information like images, text, and animations.

Although this concept might have seemed futuristic a few years ago, AR has rapidly become a mainstream technology, thanks in part to rapid innovation, and the increasing intelligence of the smartphone.

Augmented Reality can highlight specific features in the physical world, provide context in various situations, and deliver informative, educational, or entertaining experiences to users. Let’s take a closer look at what AR can do.

What is AR? Augmented Reality Definition

Augmented Reality, or “AR”, is exactly what you would expect – technology designed to augment your reality. Unlike virtual reality, in which users step into new virtual worlds, AR brings digital content into your existing environment.

An Augmented Reality application will implement visual, auditory, and other sensory information into the world to enhance your experience.

For instance, your GPS app could place arrows on your phone screen to show you which streets to turn down when you load up your camera.

AR has emerged as one of the fastest-growing XR technologies, in part because of its accessibility. Many of today’s consumers already have a tool they can use to access augmented reality in their pockets.

Smartphones, with their intelligent processing power and high-quality cameras, are the perfect platform for AR. Of course, they’re not the only way to experience augmentation.

Today’s AR innovators are also beginning to develop AR glasses, or “smart glasses” for augmented reality too. These allow for more “handsfree” experiences, particularly in the enterprise environment.

More than just a tool for smartphone games, Augmented Reality has rapidly begun to demonstrate its value in recent years in various use cases – from assisting surgeons with procedures, to helping engineers and mechanics use advanced technology in the field.

Are There Different Types of AR?

The rise of augmented reality in the last few years has sparked the discovery of different “types” of augmentation. For instance, there’s “markerless” AR, which uses GPS systems, compasses, and gyroscopes to provide real-time information based on location.

Companies can also create AR experiences triggered by specific markers, like QR codes you can scan with your smartphone.

Experimentation in the AR space has also paved the way to concepts like “Projection-based” AR, which extends into the realm of mixed reality and holograms.

When most people refer to the “types” of AR available today, they’re often talking about the AR apps we can experience through our phones, and the slightly more immersive experiences offered by wearables.

Experts believe wearable devices and smart glasses could be crucial to the future success of AR technology.

Facebook is one of the market leaders in this environment right, investing in new strategies to make AI-assisted, AR-enabled glasses a mainstream reality.

While AR is often presented as a “futuristic” technology, aspects have been around for years. Heads-up displays offering a basic AR experience have been in military aircrafts since the 1990s, providing information about the direction, speed, and altitudes of planes.

Some more advanced solutions could even show which objects in a field of view were targets for attack.

In 2009, the MIT Media Lab group introduced SixthSense- the world’s first wearable gesture interface capable of combining the world around us with digital information.

Google even introduced some of the world’s first smart glasses in 2013, though Google Glass didn’t turn out to be the success the company had anticipated.

Genuine interest in the potential of AR didn’t seem to start in earnest until 2016, which was coincidentally when some of the first consumer VR products began to appear.

The Pokémon Go AR game emerged as a global sensation in 2016, and companies began to recognise how valuable AR could be in creating amazing experiences. Since then, opportunities in AR have evolved, paving the way for both consumer and corporate technology.

How Does AR Work?

Augmented Reality aligns the real and virtual worlds to create something more immersive and powerful for users. The most common forms of AR involve adding data into a real-world environment through the use of a camera lens or a set of smart glasses.

As interest in AR technology continues to grow, the innovative tools we use to access AR are transforming too. Increasingly, we’re seeing more intelligent lenses and hardware on the market.

Perhaps the most significant components of AR, however, are:

What Can You Do with AR?

In recent years, AR technology has increased in value as companies continue to search for new ways to empower employees, connect with consumers, and interact.

While the initial AR apps we saw on the market were largely focused on entertainment, the biggest benefits of AR today seem to be in the enterprise and retail environments.

Companies are using augmented reality apps for tasks like tracking, identifying, and resolving technical issues, or training employees. Retailers are embracing AR as a way to showcase products to customers and create unique customer experiences.

Use cases for AR include:

The Future of AR: What to Expect

As with most disruptive technologies, it’s impossible to know for certain what the future of AR might look like. It seems like we’ll see an increase in the number of companies investing in AR smart glasses and wearables, following in the footsteps of innovators like Facebook.

The demand for AR wearables is increasing in various industries – particularly those in dangerous environments, like manufacturing and engineering.

As we continue to build more digital lives for ourselves, and explore the concept of the metaverse, AR avatars and virtual creations are likely to become more common too. We may see a future where more people create their own AR content and environments to share.

5G will do doubt have an impact on the potential of AR, by allowing people to send information more rapidly to remote and mobile devices.

The rise of 5G could even pave the way to a future where emergency responders can use AR glasses to detect dangers in a complex situation, and address risks more effectively.

Elsewhere, specific technology designed to improve the performance of AR solutions continues to evolve. LiDAR technology, for instance, is now being used by leading AR innovators to improve the AR capabilities on a range of premium mobile devices.

This technology will make AR apps even more accessible to the masses in the future of smartphones.

The Music Industry in the Metaverse: Re-Energised Revenue Streams

Why Are Photographic Avatars Vital for Work in the Metaverse?