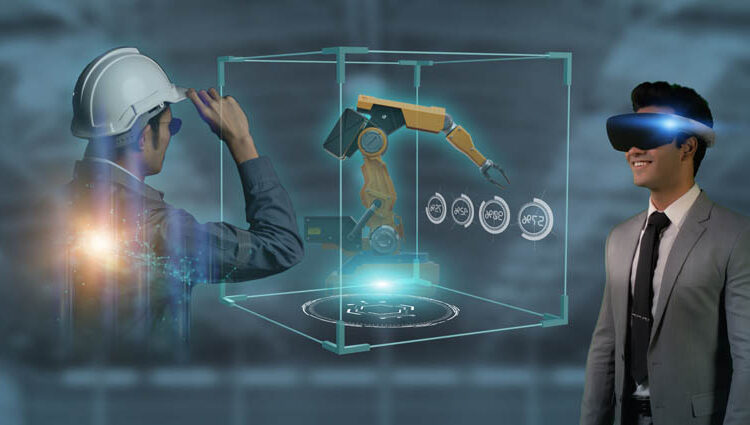 What is Mixed Reality (MR)? Of all the various facets of Extended Reality available today, Mixed Reality is often the one met with the most confusion. For years, people interested in the future of digital technology have seen “MR” as a kind of extension of augmented reality.

However, there’s more to true “mixed reality” than most people realise.

Though mixed reality is evolving at a slightly slower rate than augmented and virtual reality, market leaders like Microsoft are beginning to introduce the world to what the future of MR could really look like.

Here’s your insight into the definition of Mixed Reality.

What is Mixed Reality? MR Definition

Imagine sitting in a room at your office. You can see all the physical items around you like desks and chairs, but you can also interact with digital content too, like a shared document which updates in real-time to the cloud, or a prototype you can experiment with using a digital interface. That’s basically the promise of mixed reality.

Although this might sound similar to augmented reality, in which additional information can be implemented into a physical space, MR is a little more advanced. In Mixed Reality, the physical and virtual worlds combine and interact. MR essentially blurs the line of what’s real – and what isn’t.

Microsoft is perhaps one of the companies most effective at defining MR today. According to the brand, it’s the “next wave of computing followed by smartphones, PCs, and mainframes.”

With mixed reality, users can access instinctual, organic-feeling interactions with digital technology in a virtual world.

Similar to augmented reality, mixed reality experiences are available through a variety of tools, including headsets like the HoloLens, and HoloLens 2, or the Magic Leap headset.

It’s more common to get the true sense of an MR experience with a wearable device, however, while Augmented Reality currently relies more heavily on smartphones and their cameras.

How Does Mixed Reality Work?

As mentioned above, the functionality of mixed reality is very close to that of augmented reality. The way we use mixed reality today is evolving thanks to the development of intelligent tools and systems which allow for better interactions between computers, peoples, and things.

Mixed Reality depends heavily on the evolving relationship between humans and machines. To work effectively, an MR solution needs to be able to understand the various actions of a person in a specific space, as well as the surrounding landscape.

Mixed Reality uses a series of cameras, sensors, and often AI-enhanced technology to process data about a space and use that information to create digitally-enhanced experiences.

When, for instance, a user puts on a set of mixed reality glasses, the cameras and sensors in those glasses connect to a software program which collects as much information about the environment as possible, essentially creating a virtual map of the real world.

Using that map, the MR technology can add holographic images and content into the world through the use of image projections.

To work effectively, MR needs to be able to track:

Computer processing in the cloud, advanced input sensing, and environmental perceptions allow MR solutions to successfully merge the real and virtual worlds in a way that goes beyond the basics of augmented reality technology.

What is the Mixed Reality Spectrum?

One of the best ways to look at mixed reality is through the “mixed reality spectrum”. According to innovators in XR, mixed reality exists in a spectrum alongside virtual, and augmented reality. This spectrum is otherwise known as the “virtuality continuum”.

The two biggest areas of “extended reality” have a very specific placement on the virtuality continuum. Virtual reality exists closest to the “digital” end of the spectrum, where the majority of the content you interact with is virtual, though you’re still physically present in the real-world.

Augmented Reality exists closer to the “physical reality” side of the spectrum, where the majority of the content you see and interact with is real, with a small amount of digital augmentation. Mixed reality is closer to the middle of the line than both of these complementary technologies.

With mixed reality, you’re creating a fully immersive experience where you can place digital objects in the physical world, through things like holograms, and interact with it as though it was physically present.

You can also embed yourself into the “virtual” world from the physical world, by creating avatars and streaming information through the cloud into other MR-enabled spaces.

What Can Mixed Reality Do?

The complexity of successfully creating mixed reality experiences means we’re still in the very early stages of discovering MR’s potential. However, the opportunities are potentially endless.

Microsoft and the HoloLens technology show us that MR can be used to create holographic experiences, essentially allowing people to “appear” in the same rooms as their colleagues.

Mixed Reality programming allows digital objects to interact with physical environments, and people to interact with virtual elements, as though they were real. Basically, we can enhance and improve every aspect of our world.

With Mixed Reality, we could:

The Future of Mixed Reality

A true mixed reality experience is still in development. We’re still trying to find the best ways of pulling digital content into the world as we know it – but innovation is happening, and more rapidly than most people might expect. We’re rapidly getting to a point where mixed reality isn’t just a science-fiction concept but a real possibility.

Similar to other elements of the XR environment, MR investment has been accelerated by the pandemic, and the demand for more immersive, virtual experiences. The arrival of new technology in the landscape will only continue to improve what we can accomplish with MR going forward.

For instance, companies are already using solutions like 5G to reduce latency and improve the rapid transmission of data. Artificial intelligence could also be extremely useful in creating MR tools capable of understanding real and virtual content connections.

Combined with the rising available of technology for creating lightweight, powerful smart glasses, the rise of new, enhanced software in the MR landscape could mean we see a new, mixed reality future a lot faster than expected.

Already, Forrester Research believes more than 14 million workers in the US will be using smart glasses by 2025. As enterprises push for a future enhanced by extended reality, the opportunities in MR will only continue to grow.

Bitcoin Corrects Gains, Why Dips Could Be Limited Below $48K