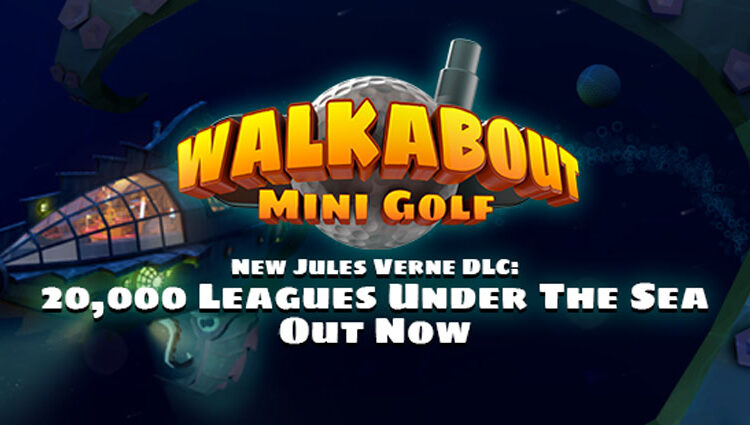 Gaming studio Mighty Coconut has released a new virtual reality (VR) board for its Walkabout Mini Golf Course based on 20,000 Leagues Under the Sea, which will debut on the Meta Platforms’ Quest and Rift headsets, the company announced on Thursday.

Don Carson, Senior Art Director for Mighty Coconut, spoke to Meta about the impressive design and world-building in the new release’s Labyrinth course, leading to an intersection between virtual mini golf gaming and amusement parks. Carson’s rise to prominence in the gaming studio industry reveals the level of craftsmanship and imagination needed to develop immersive mediums for VR users.

According to Carson, he had previously worked for Disney’s research and development team, Imagineering, in the late 1980s to early 1990s, but was told that “when I left Los Angeles that they’d never use me again.”

Explaining his career path to Mighty Coconut, which began in September last year, he said,

“The only other career I could think of was game design. Then a year into my new job the theme park world went, ‘Yeah, we will use you,’ so I went right on back. I’ve jumped back and forth between games and theme parks ever since”

Carson’s career with Mighty Coconut launched while developing Sweetopia, followed by a full initial project for Welcome Island’s redesign and later, Labyrinth and 20,000 Leagues Under the Sea.

He told Meta that had constantly been moving between projects at different stages. Many of his games started by searching for inspiration on Google Images and using MURAL for massive mood boards during the course of the project’s development. Carson later sketched ideas for approval from teams.

“I have to say that Walkabout—every single thing that gets handed off, the next person makes better. A theme park job, you might run it all the way from beginning to end, and you might ride through it and there are a couple of moments that are just cringeworthy. All the Walkabout things I’ve seen, I’m just so incredibly proud of the choices that were made, and they weren’t necessarily mine. It’s the group ensemble way in which we build”

For Carson, Walkabout’s immersive courses are finalised in months, with theme park attractions in years. Both were approached “emotionally” from the same perspective, where creatives could “suspend our disbelief and let it take us places” regardless of the golf course designed.

Presence in VR – Natural or Artificial?

According to Carson, suspension of disbelief in VR had a difficult balance as many immersive experiences needed to feel natural and meet people’s expectations.

He explained that the worst thing content creators could do was create an experience that was “vastly different” from what people had in mind.

“When we enter a space, we have expectations as to what it’s going to deliver—and then we can play with those expectations, and bring people into a narrative that we lay out for them, sort of breadcrumbs”

He explained that many narratives in the gaming experience did not need to be detailed or complicated, citing a skeleton from a conquistador in the Walkabout’s El Dorado course.

“It’s not important to the game that [the skeleton] is there, but to the people who are playing—the first person who stumbles on it builds a story in their head, and then they share it with the people who arrive after them,” he said in the interview.

He outlined the game’s story, which contained 18 chapters as there would be 18 holes, adding that Labyrinth was “very Alice in Wonderland” as the protagonist constantly travelled to different places and met different characters. 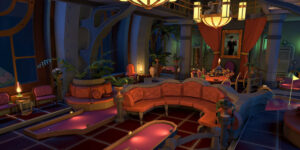 Concept art from the Nautilus board on Walkabout’s 20,000 Leagues Under the Sea golf course. PHOTO: Mighty Coconut/ Meta Platforms

The game is set within the iconic Nautilus featured in the book, which differs from the previous Labyrinth game setting.

Carson stated that with most courses, “we get away with murder,” but the underwater level only provided “a container, and we filled every square inch of that tube.” Rooms on the Nautilus contained a high number of small details, which Carson said was “the core” of the board.

Additional challenges to the game include Julius Verne’s legendary Squid, which attacks the Nautilus submarine also in the game, allowing VR gamers to sense the “ominous” creature outside the board.

“We wanted to have multiple holes in it, so you approach up high and constantly sort-of peer back into it. And we want to be able to see outside too, so there’s big old windows bringing in caustic light that’s shining off all the interior surfaces”

Carson’s favourite gaming mode was ‘God mode,’ where players could receive a ‘dollhouse’ version of all activities in the submarine’s map, which “came out really nice.”

‘Meeting Expectations, then Exceeding Them’

Concluding, the game developer said that many players could connect with others in the game’s many immersive environments, adding,

“We get just as many complimentary emails from people saying they reconnected with their dad [in Walkabout] as we do saying ‘Hey, we had a really great game.’”

The power of VR gaming continues the journey of many content creators and studios, who build the immersive worlds essential to connect people in all scenarios, whether via remote collaboration for enterprises, leisure such as with Mighty Coconut’s creations, or elsewhere across the Metaverse.

Companies such as Trigger XR have explored augmented reality (AR) as a medium for gaming, with the release of hit titles for the Professional Golfers’ Association (PGA) and Universal Studio’s Jurassic World blockbuster movie, among others, using Niantic’s Lightship AR developer kit (ARDK).

Other platforms competing in the gaming industry include Pico Interactive’s Pico 4 headset, Sony’s Playstation VR 2, and HTC VIVE’s Pro and Flow headsets, and HP’s Reverb G2, among many others.

Meta’s highly-successful Quest and Rift series of headsets have captivated audiences with a hit series of immersive games, including hit titles like Population: One, Resident Evil 4, the Climb, Beat Saber, and SuperHot VR, among many others. For the future, new releases will continue to provide virtual realities for enthusiasts as the Metaverse builds a greater number of use cases across enterprises and consumers.

Gamers can purchase the Quest and Rift versions for $2.99 on the Meta Quest store. For more information and the full interview, kindly visit Meta’s blog.