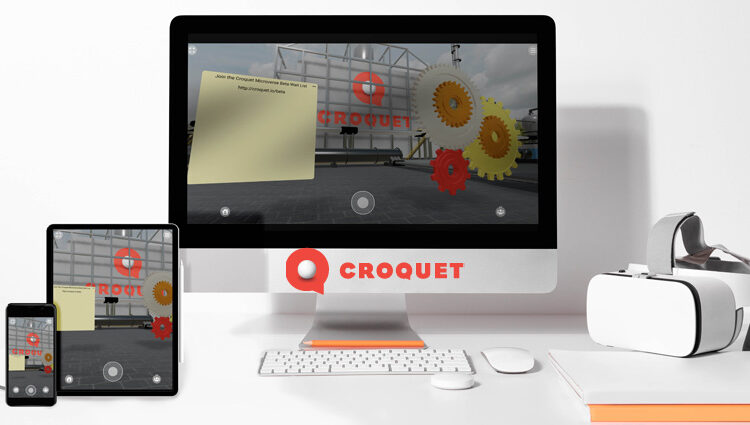 Croquet Corporation, a major tech firm tasked with building Metaverse infrastructure and solutions, announced on Tuesday a novel platform for its open Metaverse operating system aimed at providing interoperable, cross-platform functionality to facilitate the rise of the spatial communications platform.

The firm is releasing the alpha version of its Microverse integrated developer environment (IDE) for building virtual worlds, based on a standards-based and open platform for web developers.

The IDE allows developers to build and deploy “interoperable, [standards-based] Web and Web3 virtual worlds,” the company said in a statement, adding the platform’s portal technologies will allow secure travel and data migration across Microverse spaces created by developers and designers.

Users can tap the platform’s Web3-based virtual environments to publish across the internet, allowing developers a truly limitless design experience for shaping designing the Metaverse, the next iteration of the internet which adds spatial computing to interface with users.

Croquet OS will load instantaneously on devices via a weblink or QR code on all compatible devices, offering a persistent, low-latency, and low-bandwidth experience on the system’s Reflector Network.

The OS will facilitate multiuser shared experiences for Metaverse developers by providing infrastructure to synchronise data, real-time 3D (RT3D) objects, and interactions across devices, it added.

The tech firm also revealed its openness to developing the Metaverse via partnerships with system integrators, advertising agencies, and Metaverse firms, among others, to develop the successor to the Internet using Croquet OS open platform. The firm has also collaborated with carriers and providers for 5G carriers to develop Metaverse infrastructure via a special partnership programme.

Croquet and partner firms have deployed numerous reflectors, or lightweight, stateless microservers, across global 5G and edge networks, both on public and private networks, the company explained.

The enterprise also stated it deployed its reflectors on mobile edge computing (MEC) 5G networks to optimise functionality, allowing 5G-compatible devices to operate as portals to the Metaverse and 5G MECs as integral Metaverse infrastructure.

According to Croquet, its MEC Reflector Network offers latencies of roughly 10-15 milliseconds (ms) on public networks and 2-5 ms via private networks.

David A Smith, Founder and Chief Technology Officer for Croquet, said in a statement,

“Using open, standards-based web technologies to produce interoperable virtual worlds that can be published anywhere is a powerful approach to solving a very hard problem. Open technologies usually win. The web is everywhere, on every device with a screen. It has the largest community of developers in the world. And portals based upon open web standards will make the Metaverse truly independent and interoperable”

The firm explained that the Metaverse would likely deploy outside of larger and centralised proprietary “Megaverses” hosted by Meta Platforms and Roblox, providing company websites, industrial virtual control rooms, digital twins, and sports experiences with greater interoperability and ease of use.

“Croquet has taken a fundamentally novel approach that makes this as easy as writing local code or no code at all. It has the potential to provide an open, standards-based way forward that leverages the power of the web to create truly independent, interoperable Metaverse worlds”

While Croquet OS is currently available, the Microverse IDE has launched in private alpha to ten customers for testing and development. Developers interested in joining the open beta waiting list set for launch in June this year can apply at https://www.croquet.io/beta.

The company has remained committed since its founding in 2018 to democratising the Metaverse under open frameworks for roughly 16 million JavaScript developers. The company also receives funding from investors such as SIP Global Partners and a group of financial and tech experts.

The news comes amid rising demand for open-source and decentralised platforms, with many experts from the industry stating open frameworks would provide the most optimal platform for the Metaverse.

Croquet’s David Smith stated the need for such technologies to guide and develop the Metaverse in a Reality Labs lecture in 2020, where he showcased his firm’s cross-platform features and tools.

Anyone interested in the future of computing should go through all the @UwRealityLab lectures. I loved this talk from David Smith of @CroquetIO on “The Augmented Conversation,” and the reminder that HCI is ultimately always about Human-Human interaction!https://t.co/bn63RAPBvu

At a February Gatherverse Summit, Kent Bye, Producer for the Voices of VR podcast, outlined in great detail theoretical frameworks for building the open Metaverse, which would require a “massively scaled and interoperable network of RT3D virtual worlds” operating “synchronously and persistently.”

Speaking on open-source Metaverses, an expert panel talk at a VR/AR Association Global European Summit in September last year discussed the need for an open framework and to avoid closed, proprietary, and fragmented metaverse platforms, namely after Meta Platforms Founder and CEO Mark Zuckerberg shifted focus to building the Metaverse in an August interview.

Bitcoin Holds Key Support, Why BTC Must Clear This Resistance