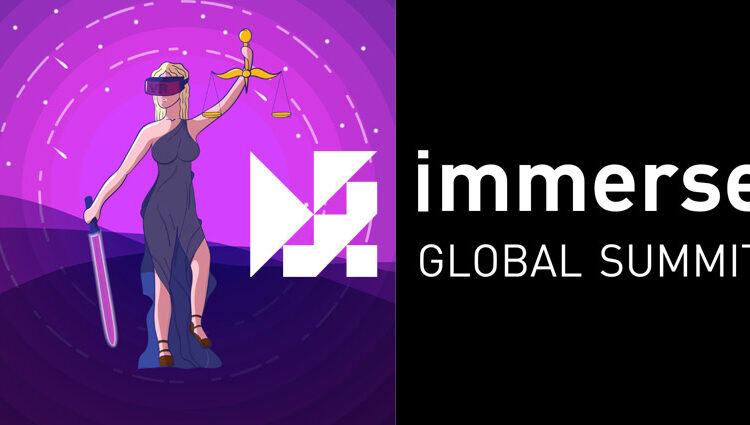 Growing debates have surfaced in the legal industry and courtrooms across the world due to the rise of Metaverse platforms, which are challenging the very framework of such institutions.

Bedat represents clients in media and entertainment across the industry and began to receive more questions about non-fungible tokens (NFTs) and the Metaverse as the entertainment industry began to incorporate the new digital assets. Her role is to advise, protect, and defend creative content from users and creators.

When asked about Metaverse law, Bedat told the audience that, to date, there was “no such thing as Metaverse law,” but that lawyers instead worked with peripheral assets such as securities, the blockchain, and cryptocurrencies as they were included in virtual worlds.

Lawyers with expertise in other fields such as real estate, tax, copyright, and trademark law advised clients from their respective specialisations to the Metaverse, but despite this, it was difficult to “hold yourself out as being an expert in all of those things in the Metaverse,” she explained.

For Metaverse clients, it was crucial for them to define precisely what they wanted to achieve to contact the best lawyer for receiving their advice.

Enns added that lawyers had to identify additional steps in Metaverse processes, such as blockchain, carbon emissions, and transmission times for funds, among others, for virtual real estate sales.

When asked about the “grey areas” of Metaverse-based branding and copywriting for filmmakers, Bedat noted that the video gaming industry faced challenges with new Metaverse technologies and content, namely via disputes involving trademark owners and brands.

Trademark and Copyright Law in the Metaverse

Speaking on the issue, Bedat cited a case where Italian furniture manufacturer VIRAG unsuccessfully sued Sony Computer Interactive Entertainment after it created the Gran Turismo racing game in 2015. The lawsuit involved Sony, who replicated the Monza, Italy racetrack with the manufacturer’s logo, leading to a corporate lawsuit in California courts.

The courts overturned the case, stating video games were an expressive work protected under the First Amendment and the Lanham Act, which outlines trademark infringement terms.

Bedat explained the reasoning behind the court ruling, adding,

“One, there was artistic relevance of the actual trademark to the game because the game is trying to replicate a very realistic world and racetrack, and two, no one was going to be confused and think this floor manufacturer was connected with the game”

Courts also overturned a lawsuit where an adult entertainment club launched a case against Rockstar Games, creators of Grand Theft Auto after the latter recreated the virtual East Los Angeles environment. In the virtual world, the “Play Pen” club was renamed the “Pig Pen,” sparking controversy.

“You’re probably going to be okay if you’re recreating a meta New York and want to recreate the Pepsi Cola sign in Queens, [but] what if then you’re creating a fictitious Coca Cola theatre on a [virtual] Fifth Avenue that people get to walk into and watch movies, because they’re more of a risk there that people might think that Coca Cola somehow was involved there? Is that a more classical trademark use?”

Additional concerns such as selling virtual Coca Cola products in the Metaverse could lead to trademark violations, and Bedat’s practice had encountered a case involving an artist creating meta Hermes Birkin bags, prompting the latter to seek legal action against the artist for breaching trademark rules.

Exploring international law and standards for the Metaverse, Bedat stated lawyers working with Metaverse cases would need to determine the jurisdiction of cases, where clients could file claims, how they could protect their intellectual property, and others.

When asked by XR Today about creating continuity of policy in global standards and the XR industry, Bedat continued, stating that virtual or meta spaces were not “beyond the law and beyond the way that traditionally second virtual worlds have been dealt with.”

Users had to respect Terms of Use which incorporate respective laws on the platform, even while navigating between virtual spaces. Other considerations such as whether laws were enforceable, easily seen by users, their location on the platform, and whether the law was a smart contract linked on the blockchain were some of the main concerns.

“I don’t see really any reason why there wouldn’t be an opportunity, the same way that you regulate digital marketplaces today that operate around the world and you say this as a governing law, or why you couldn’t do the same and in a meta-world, for lack of a better word. So that’s probably one way that it’ll happen, but for sure, there will definitely be enforcement issues”

The ongoing Metaverse 2.0 event is hosted by the Virtual and Augmented Reality Association and runs from 9-10 March. The massive event features an industry-wide lineup of companies, representatives, experts, and researchers from across the global XR community.

Topics covered in panel discussions and fireside chats at the event include building Metaverse platforms, cryptocurrency, the blockchain, NFTs, avatars, virtual real estate, and many others.

Leading global firms such as Lenovo, Meta Platforms, HP, Vuzix, Immersive Tech, Superworld, and many others will offer their expertise on the spatial communications platform set to reshape human connectivity.

South Korea Has A New President