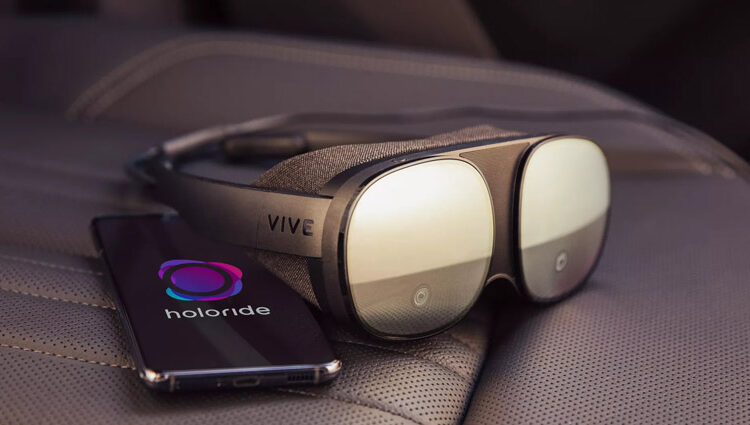 Immersive entertainment firm holoride has partnered with HTC VIVE to roll out its extended reality (XR) platform, the company announced on Friday.

The partnership will integrate the company’s XR technologies on HTC’s VIVE Flow goggles, allowing users to immerse themselves in virtual worlds, games, and real-time 3D (RT3D) content for travel.

holoride has selected the lightweight, compact headsets as its first fully-compatible head-mounted display (HMD) for the entertainment platform, and is set for launch in the second half of 2022.

1/4
Are you ready for some big news? 💥
We are partnering up with @htc and making the @htcvive Flow the first ride-ready glasses for in-car entertainment ⚡https://t.co/In8wKEEufo

The VIVE Flow weighs at just 189 grammes and features a dual-hinge folding design for impressive comfort and portability. Despite its small form factor, the headset provides massive cinematic screens for watching all the latest movies, experiences, and other content.

Nils Wollny, Chief Executive and Co-Founder of holoride, said his company was on a mission to create “exciting in-vehicle experiences” for travelling the Metaverse

“VIVE Flow is the ideal device for on-the-go XR, so we are thrilled to be partnering with HTC VIVE to give riders direct access to holoride. The glasses’ sleek, portable design means riders can enjoy a fun and connected experience anywhere they go”

Shen Ye, Global Head of Hardware for HTC VIVE, explained that the device could fit in the palm of a user’s hand and “still deliver a breathtaking experience.”

“Paired with holoride’s impressive tech, you’ll be able to turn car rides into virtual amusement parks. We’re very excited to work with holoride in shaping the future of passenger entertainment”

The integrated motor solution will demo at the Mobile World Congress (MWC) 2022 in Barcelona, Spain at its exhibition booth, from February 28 to March 3.

The world-first immersive platform’s Elastic SDK debuted on Pico Interactive headsets and will lead to the development of immersive content with reduced motion sickness for holoride’s auto platform.

Check Out Today’s Top 5 New Cryptocurrencies To Invest In

How Gold And Bitcoin Have Performed With Russia-Ukraine Conflict