The Best Haptic VR Devices and Innovations for 2022 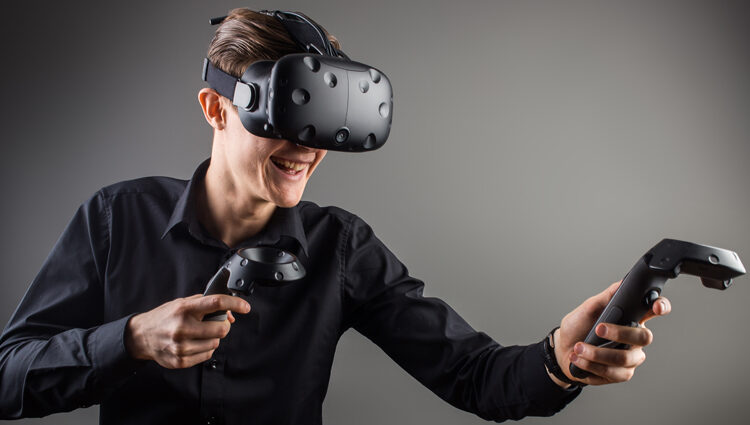 Haptic technology refers to any system that recreates the feeling of touch when interacting in a virtual environment. When we type on our iPhone keyboards and the smartphone vibrates gently to show that it recognizes the input, it is a form of haptic technology used for feedback.

Haptic technology uses a combination of vibrations and motions to confirm user inputs in VR and has major implications for virtual reality (VR), as VR interactions do not use the familiar physical input systems like a keyboard, a mouse, a joystick, or a touchscreen.

When you lift an object in VR, you need to know that you have placed your hands in the right position, performed the right gesture, and applied the necessary amount of force.

Here are some of the latest and most innovative moves in the haptic VR market that could shape the future of the industry:

Ultraleap is a haptic technology company that builds haptic gloves that support hand tracking and mid-air haptic feedback. The technology isn’t just for VR – you can integrate it with any digital system, and Ultraleap’s technology will allow users to enter inputs through gestures without even touching the screen.

Ultraleap recently raised $82 million in funding and the company plans to apply haptic technology in all environments, inside and outside of the metaverse.

SenseGlove has built a haptic glove solution that leverages force-feedback systems to improve training for industrial scenarios such as handling hazardous materials.

The glove debuted as a prototype at the Consumer Electronics Show (CES) 2021 and began worldwide shipping in October of last year. Using SenseGlove Nova, users can perceive shapes, textures, stiffness, impacts, and resistance in VR.

This is a truly futuristic piece of technology that combines haptic feedback, motion capture, and biometrics to deliver a full-body sensory experience in VR.

The suggested use cases are for training first responders, athletics, enterprise training, and rehabilitation. Teslasuit is still in the development stage, although a few have been auctioned for cryptocurrency worth approximately $20,000.

A Chinese research team has developed an elastic electronic skin that uses a collection of sensors, vibrating magnets, and wireless transmitters.

As it is highly flexible, you could attach the skin to virtually any part of the body and turn it into a haptic-based input system for VR. The skin is incredibly fast, requiring just 350 microseconds to convey a signal when operating on Wi-Fi, which is lower than the natural human reaction of 550 microseconds on an average.

An ‘aerohaptic’ innovation by the University of Glasgow

The University of Glasgow has developed a new technique called aerohaptics, which leverages air jets to provide users with feedback when they interact with a hologram.

Using aerohaptics, one can recreate the sense of touch in mixed reality (MR) environments and make holograms much more lifelike. For instance, aerohaptics would allow users with a 3D hologram of a basketball to pick up the object, bounce it, and play with it, despite it being only a digital entity.

Meta (formerly Facebook) is working on its own haptic glove for use inside the metaverse. Reports suggest that there is already a prototype in place, although the details are yet to be announced.

The glove – including the palm – is entirely embedded with tactile sensors that can convey pressure, weight, and other feedback to the user. Meta’s haptic glove can also be used in multiplayer gaming scenarios.

TactGlove by bHaptics claims to be the first haptic glove in the industry that is ready for consumer use. The device was demonstrated at CES 2022, and comprises a pair of wireless gloves that can provide up to 4 hours of run time.

The gloves allow users to pick up objects and navigate the VR world through hand tracking. TactGlove is compatible with Oculus Quest and comes in three different sizes to suit every consumer, priced at $299.

Also debuting at CES 2022, Skinetic is a jacket or vest embedded with haptic technology that recreates lifelike sensations for interactions in VR worlds, from rain drops during a thunder shower, to wind on the beach, or even bullets in a shooter game.

The vest has 20 embedded motors that can create a wide range of vibrations, addressing all the aspects of a human being’s capability for vibrotactile perception (i.e., sensing the world through sound).

EKTO ONE boots for walking in VR

A longstanding problem for moving around in VR is the fact that the user doesn’t really move, but yet seems to traverse long distances and large spaces.

Ekto VR is looking to address this through a pair of haptic-enabled boots that use a set of motorized wheels to mimic movement, without having the user actually leave the room.

The company is also working on an omnidirectional treadmill, similar to Ready Player One, that would make using the boots more seamless.

In 2021, a YouTuber with the username Lucas VRTech developed fully functional haptic gloves for VR using materials worth only $22. The design and code are all available as open-source files, allowing anyone to build their version of an affordable haptic solution.

In 2022, the same channel fine-tuned its project and developed a version ready for use in VR environments for $60.

Do you have a haptic innovation to add to this list? Let us know on social media!