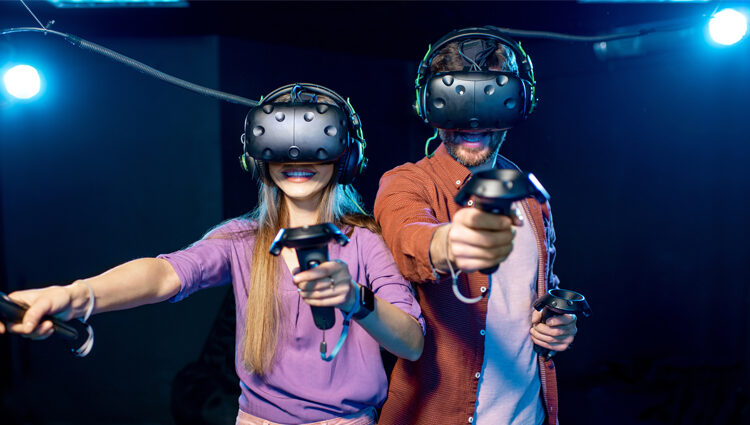 The concept of virtual reality for everyone is becoming far more realistic in today’s modern landscape. Endless innovation, ignited by the challenges of the pandemic, has prompted a slew of new VR innovations in the last couple of years.

New companies are emerging on the market to introduce their own versions of the ultimate VR headset as fundamental materials and technologies become more affordable.

It’s fair to say the VR headset market is growing at a rapid pace – but which companies should we be keeping a close eye on in this new space?

Here are some of our top picks for the most innovative VR headset vendors to watch during 2022.

Previously known as Facebook, Meta is the company behind Oculus, the world’s best-known VR headset. The Oculus Quest 2 is currently one of the most popular VR headsets on the market at the time of writing, and Meta is more determined than ever to produce incredible tools going forward.

Meta has become the number one company leading the charge to the future “Metaverse”, and to achieve its goal of a new virtual landscape, it needs to innovate.

Already, we’re seeing rumours about “Project Cambria”, the new “high-end” VR headset currently under development. This headset won’t be a successor to the Quest 2, but something specially designed for premium experiences.

Rumours suggest the new headset will include features like facial tracking and real-color passthroughs, allowing Meta to take the first steps into Mixed Reality device production.

HTC Vive is another well-known producer of headset technology in the VR landscape. Recently, the company introduced a new standalone VR headset – the HTC Vive Flow – designed primarily for casual gaming and media consumption. The Flow is controlled via smartphone applications rather than controls, and supports 6DOF head-tracking.

Elsewhere, HTC is also experimenting with various different flavours of VR headset, including the Vive Focus 3 – an enterprise-focused headset designed to deliver unique experiences, like Location Based Entertainment mode, and map sharing.

The Focus 3 could potentially support more powerful group VR sessions for training and collaboration purposes, and it comes with automatic calibration.

Outside of new innovations, the HTC Vive ecosystem still has a lot to offer in existing VR headsets, like the HTC Vive Pro 2 with its sensational image quality.

Currently, it’s difficult to say whether Apple is going to be the VR headset innovator we’d like it to be. Apple has announced a number of upcoming innovations in the extended reality space, including the arrival of high-tech apple glasses for augmented reality. Rumours suggest VR headsets are also on the way, along with tools for mixed reality experiences.

A few details have already begun to emerge about Apple’s upcoming headsets, such as they’ll be equipped with Wi-Fi 6E support to skip the need for physical cables.

Additionally, there’s a good chance Apple will invest a lot of time and energy into making its headsets as innovative and attractive as possible at the same time.

Unfortunately, with production of VR headsets in the Apple roadmap only scheduled to begin in 2022, we might not see the actual device as soon as we’d like.

Lenovo is still a relatively overlooked player in the VR landscape for the time being. The company introduced the world’s first standalone Daydream VR headset with the Mirage Solo.

Here, users can experience VR without needing to access a separate smartphone or PC. What’s more, the headset is surprisingly affordable, making it a great choice for many business deployments.

Lenovo’s Mirage headsets come with access to Google WorldSense technology, as well as opportunities to tap into a wide range of unique applications. There are about 250 VR apps to choose from, and various advanced tracking tools to help you get the most out of your virtual experiences.

The Mirage Solo also has an impressive 2.5-hour battery life and comfortable ergonomic design. It’ll be interesting to see if Lenovo builds on this going forward. Currently, however, we’re still waiting to see if a new headset is on the horizon.

Pico Interactive’s VR headset are specifically built with the enterprise in mind. Products like the Pico G2 enable 4K video quality, so companies can deliver the most immersive professional experiences to their teams.

There’s also access to devices like the Neo 3 Pro, and the Neo 3 Pro Eye, which enable sensational high-power processing and 90 Hz refresh rates.

For instance, built-in eye tracking and foveated rending features ensure the system focuses the most processing power on the areas where people are looking. This helps to optimize the overall performance of the system.

An ergonomic approach to design, for long-term wear, built-in spatial speakers, and access to a host of other fantastic features make Pico’s headsets one of the top contenders in enterprise VR.

Another market-leading solution for enterprise VR, Varjo works hard to ensure team members can get the unforgettable virtual experiences they need.

The Varjo VR-3 is the current headset available from the company at the time of writing, offering the industry’s highest resolution, across the widest possible field of view.

Varjo’s VR-3 technology makes it easy for business leaders to discover the benefits of VR for collaboration, creativity, and training. At the same time, the Varjo team is still investing in a wide selection of alternative extended reality experiences, such as the XR-3 headset with passthrough view for mixed reality experiences.

With a focus on the enterprise market, Varjo will no doubt continue to innovate in it’s use of ergonomic, high-quality hardware for the future of virtual reality. There’s also technology available outside of the enterprise, space, like the Varjo Aero, which aims to bring virtual reality to everyone.