Gaming in the Metaverse: The Next Frontier? 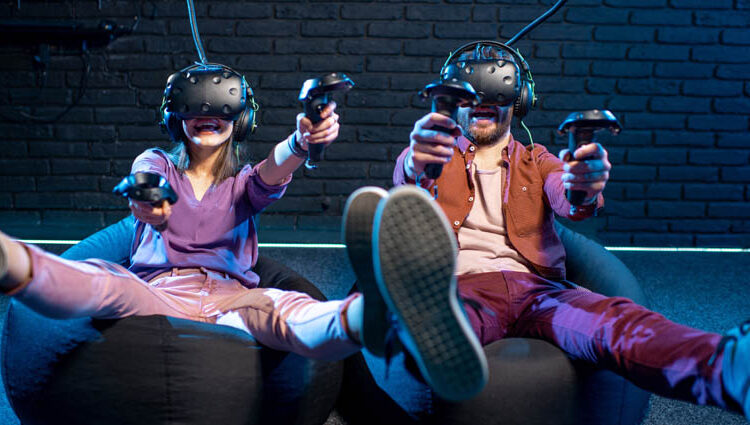 Gaming has always been a prime candidate for virtual reality (VR). Even early immersive games in 2D like Minecraft and Second Life incorporated elements of the now-WIP metaverse – such as 3D avatars, world-building, and observation as gameplay.

Now, as companies like Meta and Epic Games attempt to build a connected universe of virtual realities, gaming has a new home.

In a recent survey, 59% of industry experts said that gaming will dominate VR investments for the next few years. 64% also said that gaming has the highest potential to benefit from VR, among all other use cases.

Let us explore what gaming could look like in the metaverse, how soon you could get started, and some of the potential pitfalls to avoid.

The metaverse can be defined as a unified and interoperable VR space where users can interact with each other and the digital world around them through advanced human-computer interaction (HCI) hardware and software.

Currently, VR gameplay is available as standalone applications that you can install on your desktop, VR gear, or mobile phones to engage in an immersive rendition of traditional video games.

The main difference is that the in-game universe now appears as a three-dimensional VR world that you can view in 360-degrees and almost “touch” through a realistic sense of perception.

The metaverse (first coined in the 1992 science fiction novel, Snow Crash) expands this concept further. It posits that you could connect multiple VR games – and, indeed, any VR application or space – to create a single interoperable environment for users.

They would be able to navigate in and out of gaming applications, interact with the same players in multiple spaces, and even port their wins without having to take off the VR headset.

In this context, gaming will have the following characteristics:

Still in its early stages, the metaverse has attracted significant investments from gaming companies, tech giants, and VCs alike. There is very little doubt that the metaverse is the future of gaming.

Companies like Decentraland, Sandbox, Epic Games, and Meta are some of the key early movers you should note:

Decentraland is among the first companies to explicitly try and build a metaverse. It has a 3D VR platform with measurable real estate, a cryptocurrency based on Ethereum, and discrete spaces for multiplayer gaming.

Decentraland has also invested in a company called Decentral Games to further develop its gameplay capabilities.

Sandbox is another metaverse-native video game that allows you to play, create, own, and govern a virtual space. Sandbox’s economy is based on user-generated crypto and NFT assets, and it partners with global brands to deliver unique and enriching experiences.

The Sandbox marketplace has 20,000+ NFTs that you can buy and incorporate in your VR world.

Epics Games is best known for Fortnite, a VR game and event destination bundled into one. With Fortnite’s rise in popularity, artists from around the world have delivered concerts using the game’s metaverse-like capabilities.

Recently, Epic Games announced that it would invest $1 billion to build its own metaverse centred on gaming.

Meta is relatively new to the metaverse segment, but it has an impressive track record of VR innovation. Facebook built a robust experiential world around its Oculus family of products, and these innovations will continue to inform the company’s vision for the metaverse.

Developers can leverage Horizon Worlds by Meta to create games and publish them inside the metaverse.

Of course, VR and video games, in general, have always had to counter legal and ethical issues, and the same will apply in the metaverse.

There are three primary concerns to navigate:

Keeping these factors in mind, we can estimate that we are 5 to 10 years from gaming in the metaverse – but the road ahead looks extremely promising.

Elon Musk Explains DOGE Edge Over Bitcoin, But Where Is He Wrong?