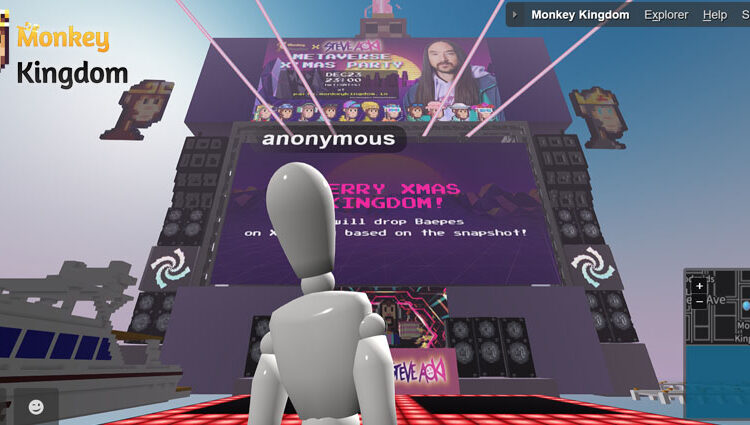 Hosted on the Cryptovoxels Metaverse event space, the Grammy-nominated artist will kick off an hour-long set on a “temple-inspired” immersive stage. Taiwanese artist Dizzy Dizzo will also open the concert.

Attendees can join the live event at the platform’s website on December 23 at 23:00 Hong Kong time.

In a statement, a Monkey Kingdom spokesperson said,

“[We] would like to extend a warm invitation to all holders and members of the community, as well as any guests and fans that simply wish to join the festivities or tune in to view the performance – ushering in the holiday season as a united collective”

The news comes as Aoki joins a growing list of supports in the music industry of non-fungible tokens (NFTs), which include show-stopping artists such as Snoop Dogg, Deadmau5, Dave Guetta, Grimes, and others.

Monkey Kingdom’s NFTs are based on the Sun Wukong, or the Monkey King, a celebrated character in the Asian community from the classic Chinese novel ‘Journey to the West.’ According to tradition, Sun Wukong represents perpetual youth, optimism, and eternal wisdom.

The concert’s promotion of NFTs aims to expand ownership of digital assets on the Metaverse as well as monetise content from creatives across multiple industries.

According to reports, more than $10 billion NFTs were traded on several blockchain platforms, up from $1.2 billion in the second quarter this year.

Artists, fashion designers, gamers, and large names such as Nike have even adopted the technologies to promote their latest product lineups.

As the Solana ecosystem marks the close of 2021, it’s a great time to look back and see just how far it’s come.

What were the highlights of your Solana year? pic.twitter.com/FyMfggTH6U

The open-source Solana blockchain network was launched last year and allows users to create and mint their own tokens as well as NFTs. Solana’s adoption on the Monkey Kingdom platform aims to build inclusivity in the NFT and Asian community globally using the Metaverse ecosystem.

Monkey Kingdom rose to massive acclaim and has become one of the biggest platforms for NFTs in the world, following its launch in late November. Artists such as Mirror’s Ian Chan, JJ Lin, Sunny Wang, Verbal, and others have provided additional artist support for the popular platform.

Market Gets Cozy With Bitcoin? Why BTC Is Set For A Short Squeeze