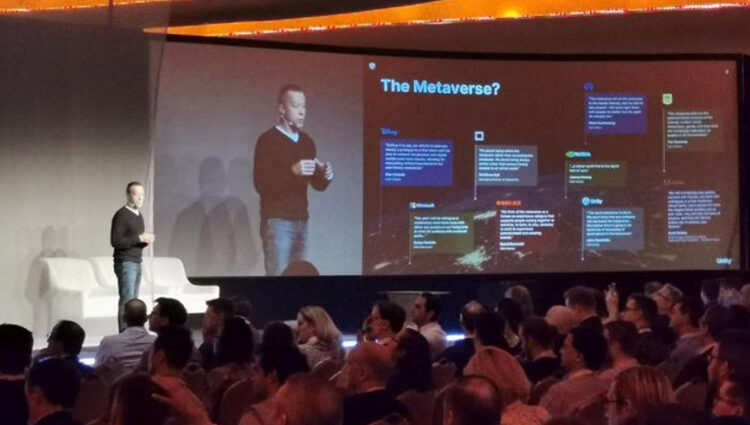 The rise of the industrial metaverse has become a key player in developing a viable, unified spatial communications platform. As companies seek to reach targeted outcomes with immersive technologies, industry leaders have leveraged their world-building technologies, in the real world.

At the start of his address, he discussed the development of the Metaverse, citing object-oriented computer scientist Alan Kay, who stated “the best way to predict the world is to invent it.”

He explained that the COVID-19 pandemic had driven the impetus to advance the platform, which was “an evolution of our digital experiences from today.”

According to his findings, the Metaverse operated in real-time at 60 to 120 frames per second. It would later evolve from utilising simple graphics to becoming hyper-realistic and persistent.

Media outlets covered the Metaverse from a consumer-orientated perspective, he explained. Platforms such as Roblox, Fortnite, and others opened massive metaverse communities to consumers, leading to further collaborations with global brands.

Regarding the industrial metaverse, he stated that global enterprises proliferated use cases in manufacturing, municipal government, construction, education, health care, and financial services.

Firms had developed them to “drive business outcomes and competitive advantages” for their businesses and operations. These entities leveraged real-time 3D (RT3D) content, with Unity leading the industry as a RT3D content creation platform.

“As a result, we operate on a massive scale at 4 billion unique unity runtimes downloaded per month, [or] 50 billion right times all around the world running once per year. [We] have a pretty good glimpse into how this Metaverse this future of digital interaction is evolving”

The Rise of the Industrial Metaverse Use Cases

Speaking further on the industrial metaverse, he segued to digital twins, or digital replicas and virtual copies of physical assets. These behave identically to their physical counterparts, which is “fundamental for these [digital] transformations industries are making.

These digital twins are developed to drive numerous outcomes for enterprises, Rhodes explained.

He additionally allowed strategic partners to assess their readiness to execute their capabilities in the technology. He cited collaborations with the Vancouver Airport Authority and others that leveraged digital twins to relieve passenger congestion at airport terminals to boost customer experiences.

These tools allowed travellers to arrive at their gates on time and streamline facility processes. This was “fully functional, at scale,” he stated. The digital twin technology had developed over 18 months time to deploy over 30 use cases to create a “safer and more sustainable piece of physical infrastructure.”

Other firms incorporated real-time sensor information for operation and maintenance (O&M). Doing so would allow firms to visual data and assets interactively “in a way where they can make the right O&M decisions without having to drive out into the middle of nowhere with physical trucks just to simply read a meter,” he added.

In the energy sector, wind farm enterprises also utilised the tools for predictive analytics. This allowed farms to time-slice simulations to evaluate the size of wind planes in geographic locations.

The models could also evaluate their optimal placements and “predictably model the exact performance of energy generation systems.”

Concluding, he discussed the role of the tech industry in developing such solutions for future use cases, adding,

“This future that we talked about is actually happening right now because each and every one of you is contributing to it. You’re building that digital force of experience that’s going to bring great things to our world and the next generation of people.”

The news comes after XR Today’s Editor-in-Chief David Dungay interviewed John Cunningham, Head of Government and Aerospace at Unity, to discuss the role of digital twins across industry verticals.

The keynote speech also follows a major discussion between representatives from GE Digital, Darkpulse, TeamViewer, and Accenture at the Industrial Internet of Things (IIoT) World 2022.

The four executives explored the utility of the industrial metaverse and how digital twins could save massive levels of resources, time, and costs in building next-generational infrastructure.

The IGS 2022 Miami is currently taking place at the Fontainebleu Hotel in Miami, Florida from 5 to 7 December. The event has seen Meta Platforms, AT&T, Lenovo, HTC VIVE, Magic Leap, and many others join the three-day activity near Miami Beach.

Global executives and thought leaders have attended to discuss the future of the metaverse, new and future emerging technologies, and to outline a roadmap for reaching milestones for the next iteration of digital communications.