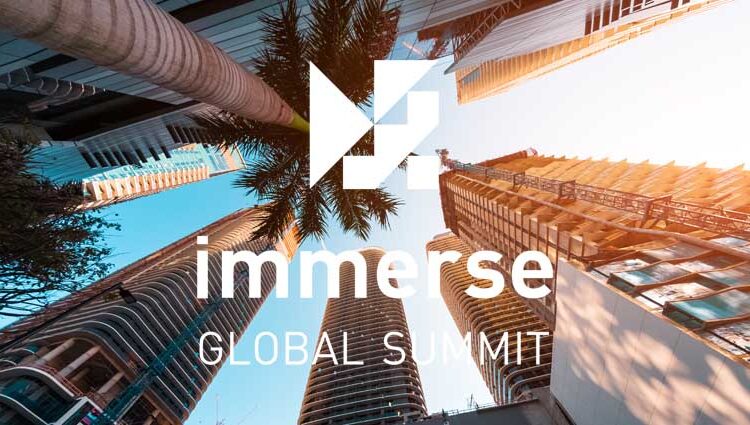 The Immerse Global Summit (IGS) is set to kick off next month at the Fontainbleue Hotel from 5 to 7 December, where the world’s global tech community will rally behind immersive technologies.

The event will showcase the future of virtual, augmented, and mixed reality (VR/AR/MR), blockchain, the internet of things (IoT), and the Metaverse with a series of keynote speeches, workshops, product demos, and many others.

The A-list event will also see additional attendees such as Boeing, Agora, and the University of Miami join emerging small and medium enterprises (SMEs) such as AMPD, Aequilibrium, rooom, Immersal, Leai Inc, Emteq Labs, Departure Lounge, and a growing roster at the prestigious Summit.

The news comes amid skyrocketing interest in the Metaverse, the next communications platform combining the Internet and spatial computing, as businesses explore use cases across all sectors such as advertising, smart factories, remote guidance, and entertainment, among others.

Miami, a rising tech hub for the United States, has seen its rankings across the Dice Tech Job Report jump to some of the top spots on the list for tech jobs growth in the first half of 2022.

Nathan Pettyjohn, Founder and President of the VR/AR Association (VRARA) and host of the Immerse Global Summit, said the IGS was “thrilled” that AT&T would deliver its keynote speech at the event.

“The importance of high-speed and reliable data transfer connectivity has never been more important than what we’re seeing in the new digital ecosystem of industries in the metaverse, blockchain, web3, virtual and augmented reality, digital fashion, digital humans, enterprise, and more”

Kris Kolo, VRARA’s Global Executive Director, also added that business leaders across all verticals should join the event to “learn how immersive technologies are transforming their business.”

“Many of the world’s most respected companies and thought leaders will be at Immerse Global Summit, in a setting curated to deliver inspiration, and allow attendees to network with game-changing business connections”

IGS and the Jet-Set Metaverse

The news comes after the IGS concluded its European Summit at the Savoy Palace in Madeira Island, Portugal in late September. The event saw over 500 attendees outline the future of Europe’s XR market as numerous organisations, firms, and thought leaders shared their insights at Europe’s rising tech hub.

Speaking to XR Today, Pettyjohn shared his views on the industry at the time ahead of the Summit, stating he hoped the VRARA’s platform could unite the industry with the collective efforts of enterprises, institutions, sponsors, and the Government of Madeira.

Building on the successes of the European instalment, the IGS Miami will also organise topics and activities based on the Metaverse, blockchain, non-fungible tokens (NFTs), immersive tech, and others.

Themed ‘Inspiration Delivered,’ the previous iteration in September showcased some of the top technologies across the sector, where XR Today’s David Dungay spoke to executives from leading firms such as Unity Technologies, Vuzix, Meta Platforms, Qualcomm, and many others.