How Do Augmented Reality and Smart Glasses Work? 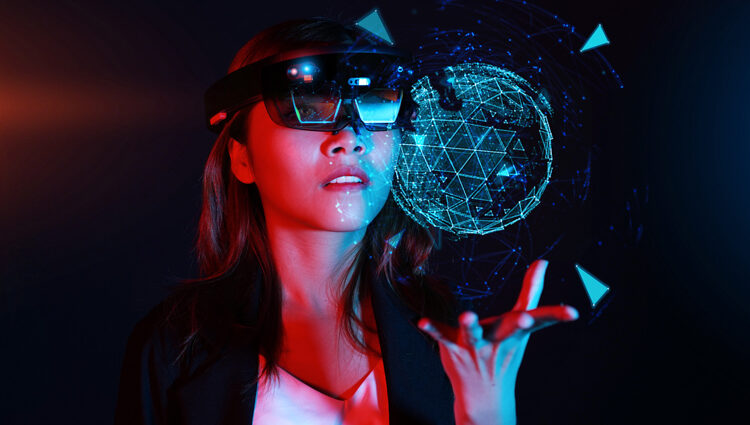 Perhaps the fastest-growing component of extended reality (XR) right now, augmented reality (AR) is taking the world by storm. The AR industry is always evolving, particularly now that new companies are investing in various kinds of smart glasses and devices. By 2028, experts predict that the industry will reach $340.16 billion.

Of course, before a person can justify investing in new solutions like AR for their business, they need to understand how the technology works. While many have heard of AR today, there are still those who don’t understand how devices can bring digital content into the real world.

AR ‘augments’ physical environments by superimposing digital content in a user’s smart glasses or device. AR solutions can do everything from transforming a face into a potato on Snap, to giving directions whilst walking through a store with Nextech AR’s mini-metaverses.

Let’s look at the basics of AR technology and how it works to influence what people see around them.

The Components of AR

There are various kinds of AR in the world to date. Smart glasses and goggles from firms such as Magic Leap allow people to see information displayed in front of their eyes on a miniature screen. AR apps help consumers and professionals interact with digital content, without the need for additional hardware.

No matter the kind of AR, each technology will include the following components:

AR has gained popularity through numerous devices such as smartphones, tablets, and smart glasses. For AR to work on a smartphone, for instance, it needs access to processors and sensors that can accommodate computer vision and processing. This is why phones with limited speed struggle with it.

The hardware also needs access to a Graphical Processing Unit (GPU) to render AR-enhanced displays and various sensors. For instance, a gyroscope measures the position of your phone, and proximity sensors determine how far away something is. Light sensors measure brightness, accelerometers detect changes in movement, and depth sensors examine distance.

Smartphones can also utilise hardware such as cameras to collect information. Alternatively, companies can create smart glasses and visors with built-in camera functionality. Devicemakers such as Nreal, Snap, RealWear, Vuzix, Iristick, Meta Platforms, Google, and Lenovo facilitate this with their solutions.

The second component of an AR device, the software is where the magic really starts. Developer toolkits like Google’s ARCore and Apple’s ARKit support the creation of software to deliver computer vision for apps. This means the software can understand a user’s physical environment through a camera feed.

Environmental understanding is one of the most important components of AR software, allowing devices to see specific features and flat surfaces to perceive surroundings.

Motion tracking also ensures devices can determine their position relative to the environment to plant objects in designated spots on the image. Light estimation also enhances AR by allowing devices to perceive lighting and place virtual objects in the same conditions to improve realism. The software and hardware components of the device must work together.

Applications are the software which provides the code to run immersive experiences on devices. With an app, users can do specific things with AR like superimpose digitised objects in real-time from store catalogues to see what they might look like in their homes.

The AR application comes with its own database of virtual images to make the AR experience more compelling. Most modern phones have more memory and processing power to accommodate things like AR applications.

There are often two ways applications can trigger AR features. The first is to use marker-based tracking, which uses things like QR codes to trigger features.

The alternative is markerless tech typically triggered when someone recognizes various real-world features. Physical objects such as table, faces, and others can trigger certain experiences.

Unlike virtual reality (VR), which aims to bring people into a fully immersive virtual space, AR enhances the physical world. It does this by using software, hardware, and applications to interpret the world around you, and impose content into that environment that looks and feels as natural as possible.

Once the system understands a user’s surroundings, it pulls information and images from the AR app to overlay digital content organically. A rendering module augments the frame within the AR game to ensure it precisely overlaps the environment in question. Since AR happens in live action, the map changes every time you move your camera. Most modern phones work at around 30 frames per second, allowing the AR experience to follow your movement.

As the industry moves into the future, developers are working to make AR experiences as immersive as possible. This includes improving mapping experiences and boost rendering times for software. It also means that teams are working on bringing faster processing into hardware.

Binance Coin Struggles Below $290 Resistance, Where Would Price Go?